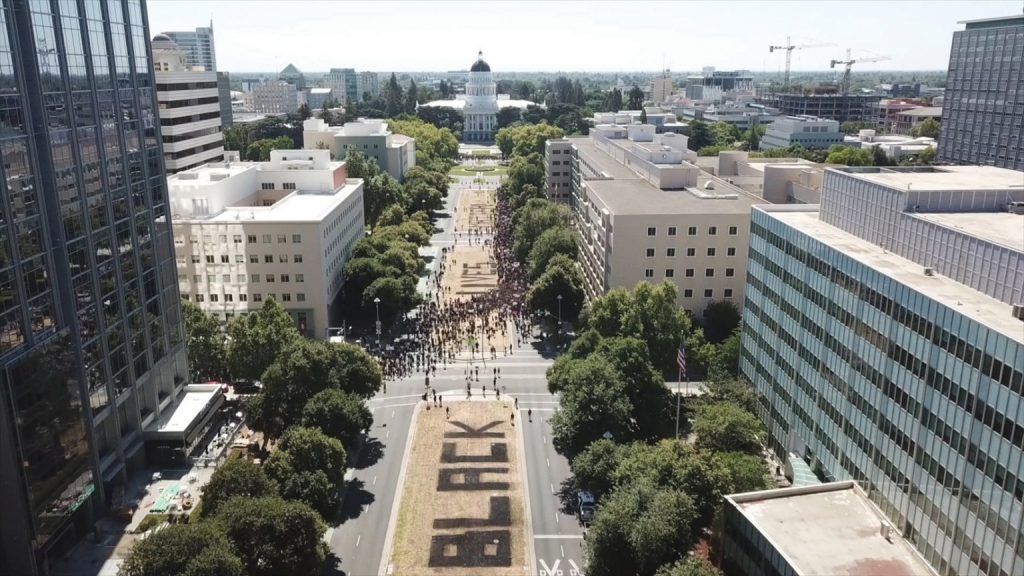 Born out of the recent protests that rocked the city and the nation in the wake of George Floyd’s death, a mural along the Capitol Mall was an atonement of sorts for its creator, local artist Demetris Washington.

Washington, 29, who also goes by BAMR (Becoming A Man Righteously), was commissioned by the local non-profit, The Atrium, a Creative Innovation Center For Sustainability, to paint the words Black Lives Matter near the State Capitol. The piece stretches across three blocks and is similar to one in Washington that was sanctioned by Black Mayor Muriel Bowser.

“I was arrested for starting riots at 15, I was expelled from school,” he said of his past in Stockton.

“For me, this was redemption in a way. Yeah, I tore some stuff up back then, but this is a peaceful way to get my message out there,” he continued.

Referred by his friend DJ Knowbody and contacted by Atrium’s founder Shira Lane, Washington admits he was skeptical when first approached to do the piece, originally meant for the steps of the capitol building. He literally decided to step out on faith and accept the job.

“At first I thought it could have been a plot to dose out the flame,” he said. “And may be used against me, but then I said to myself, ‘God wouldn’t allow that to happen on such a grand scale. A Black man painting Black Lives Matter would be an empowerment for Black people, no matter how it goes down,’ so I said yeah.”

The mural, he says, was a “huge undertaking” and getting it done before the protest march became a race against time. Washington took to social media to enlist help. After sharing a video about what he was doing on social media, people volunteered to “have his back.” One woman offered up her military discount so he could purchase more paint. Another man met him at the Home Depot in West Sacramento to help load up the five-gallon canisters. Others showed up to the mural site and helped bring the letters to life after Washington sketched them out. They also donated brooms, rakes and paint sprayers to the cause. DJ Knowbody was there as well, making it a party atmosphere.

“We all got paint on our shoes and on our legs,” Washington shared. “People were getting down, getting dirty, people had paint on their Jordans and all kinds of stuff, but they said, ‘I care.’ They were more worried about getting the message out and coming together.

“It was people from all walks of life out there, Black, White, Asian, Indian, Mexican, you name it and they were all there having conversations, exchanging information and connecting with each other.”

Washington says he’s happy that moment, and his art, will have a lasting impact.

“On that strip, there’s nothing but banks, corporate offices and high risers, so this is now their view. They have to see this. I’m like, ‘you won’t give us a home loan, now you have to see Black Lives Matter, bruh.’”

While he’s not associated with the Black Lives Matter organization, Washington supports the movement.

“It’s about a statement,” he said. “I’m Black and I’m Black as f***. My kids are Black, my mother’s Black and my brothers are Black. I done had guns pointed at me before. I done been had a knee put to my neck before by a cop and was dog-piled by the police when I was 15 years old.”

Washington says that while his behavior as a youth got him kicked out of school, it was a teacher who recognized his talent, fostered his love of art and landed him his first paying gig, an on-campus mural boasting his school’s name and mascot.

Today, Washington incorporates all of his cultural and spiritual experiences into his art. Influenced by everything from graffiti and surrealism to comic books and television cartoons, he calls his work a “mashup of dream-like visuals.”

“I have a style I feel that people now recognize at this point that might not be easy to find anywhere else,” he said.

His art has graced the Calvary Christian Center’s youth chapel in the North area and the Brickhouse Gallery & Art Complex in Oak Park. The Buffalo Soldiers outside of the nearby T&R BBQ restaurant were his creation too.

He’s also painted fence murals downtown depicting fierce versions of the Sacramento Kings’ Slamson the Lion mascot and done work for the United Way, the California Endowment and the Mack Road Community Center.
Washington is proud that his two sons, ages 12 and 11, have expressed themselves through the creative arts as well.

“It’s pretty cool to see how in the DNA it comes out in your children,” he said.

He’s served as an unofficial mentor to other artists.

“I’m usually pretty generous with advice and stuff like that. That’s because I want to see other artists grow, because if they don’t grow, I don’t grow.

Imagine a scene with only one artist rising up. Nobody’s going to be interested in that scene at all,” he said.

Washington would like to see more unity and opportunities for Black artists.

“We’re kind of scattered throughout the city and we’re not necessarily a scene,” he shared.

“The biggest challenge for a Black artist in a city where the businesses aren’t predominantly Black owned, it’s harder for a Black artist because naturally the people with the businesses who are hiring artists are going to hire artists who look like them. For the most part, they tend to hire people in their circle, people their friends recommend, which are usually Caucasian or anything but Black. I feel pretty fortunate to live in a city where it’s like that and still receive work and have people calling my man like that.”

Things are beginning to balance out, he says.

“There’s been a paradigm shift in the way that they’re even looking at us right now,” he said. “Before it was like they were wondering ‘Are these people even capable of doing anything?’ We did a whole expanse, three football fields worth of a mural in five hours. They can no longer look at us as if we are incompetent and we can’t do the job. They know damn well we can.”

The full article can be found here .